*Puts on Queen's Another One Bites The Dust* California Rep. Eric Swalwell, who apparently was running for President, dropped out of the race this week while environmental extremist Tom Steyer jumped in. Still no state budget as Cooper holds teacher pay raises, education funding, and rape kit backlog funding hostage for a single item on his liberal wish list. Congrats to Dr. Greg Murphy on his primary victory! If you're interested in helping him out on the ground, check out his website here. What did one hospital exec call Dale Folwell and state legislative leaders? Read on to find out and let's get ready to welcome President Trump to NC next week!

STORIES FROM THE NATION

The Trump administration has decided to drop the citizenship question on the 2020 Census. A disappointing decision for sure since the question is widely supported, but conservative Wilmington radio host Tyler Cralle noticed a disturbing trend of people saying they were going to boycott the Census. A word of advice: DON'T. You want to ensure NC gets that 14th Congressional seat? Don't skip the Census. The Wall Street Journal

Democrats have been up in arms about the situation regarding minors at the border with the loudest voices coming from the Members who voted AGAINST the bill meant to help the situation. Dems are holding a hearing on the situation and they used a photo of kids sleeping in holding areas. Guess when the photo was taken? The Daily Caller

You all have seen this tagline before: "Sue 'Til Blue." It's the mindset of the NC Democrat Party who are determined to get their power back through the court system instead of, you know, running on their ideas (or maybe that's why they lose). This isn't unique to North Carolina, so see where else Democrats led by Eric Holder are coming for your republic. The Washington Times

President Obama had a disastrous foreign policy, and the Iran Deal was his crowning disappointment. The Obama admin should've gone through Congress to get approval, but Mr. "I Have A Pen And A Phone" went a different route. Take a wild guess what Iran is doing now. Associated Press

State Treasurer Secretary Dale Folwell has been working on the Clear Pricing Project that's meant to save taxpayers money and reduce costs for those on the state health plan. There's been some contention on the effort, but it's not usually a good idea to negotiate by calling your opponents derogatory names like "retardicians." WXII

Ever since the people of North Carolina swept Republicans into control of state government in 2010 after a century of Democrat dominance, the state's rankings have been on the rise. Thanks to the conservative reforms put in place by the House and Senate, North Carolina was ranked the most robust economy in the country. SpeakerMoore.com

The hits just keep on coming for Dan McCready. This time, it looks like a little sweetheart deal and maybe some quid pro quo. Check it out. The Washington Free Beacon

As legislators battle it out with Governor Cooper over Medicaid expansion in the state budget, other Democrats are feeling the pressure. While other groups are using digital pressure, others are going a little more old-fashioned route. Winston-Salem Journal

In one of the rare bipartisan-supported pieces of legislation, the House passed a renewal of the 9/11 Victims Compensation fund. A couple weeks ago the Recap mentioned the passage of the National Defense Authorization Act in the Senate, the military funding bill that is usually passed on a bipartisan basis every year. After passing easily out of the Senate, here's how badly House Democrats mucked it up: it was passed 220-197 with EIGHT Democrats joining Republicans. Did all three of NC's Congressional Democrats sell out America's servicemen and women? Yes indeed:

On the Senate side, back to the business of securing the nation's judiciary for the next generation. McConnell filed cloture and confirmed four more judges to District court seats.

The big stalemate is obviously over the budget. Reckless Roy Cooper is holding up EVERYTHING over Medicaid expansion. Need some resources to talk to your friends about why Medicaid expansion is a bad idea? No problem: go here, here, here, and here. What else passed the GA chambers this week? One of the big ones was a bill aimed at combating absentee ballot fraud, obviously a big issue in NC. Republicans have also been leading the charge regarding criminal justice reform, this bill working to help low-level offenders clear their records clearing House Judiciary. Signed into law this week is another bill that will allow drug dealers to be charged with murder. Republican Superintendent of Public Instruction Mark Johnson has been hard at work with legislators working on legislation that will reduce testing in NC schools.

Want to be a part of the massive grassroots army to help keep NC red in 2020? Sign up for future Trump Victory program trainings here: Trump Victory Leadership Initiative

The East Wake Republican Club is holding their annual Red, White, & BBQ event TOMORROW! This is always a fun event and has some star power in terms of candidates attending, so get your tickets here: Red, White, & BBQ

Also on Saturday is a Day of Action for Dan Bishop. Set aside some time tomorrow morning and go knock some doors in Mint Hill: Dan Bishop Day Of Action

With a new Chair and Vice Chair, as well as a nominee for the 3rd, it's time to rally behind our leaders! The first of several Unity events will take place next Friday in New Bern. Details are below: 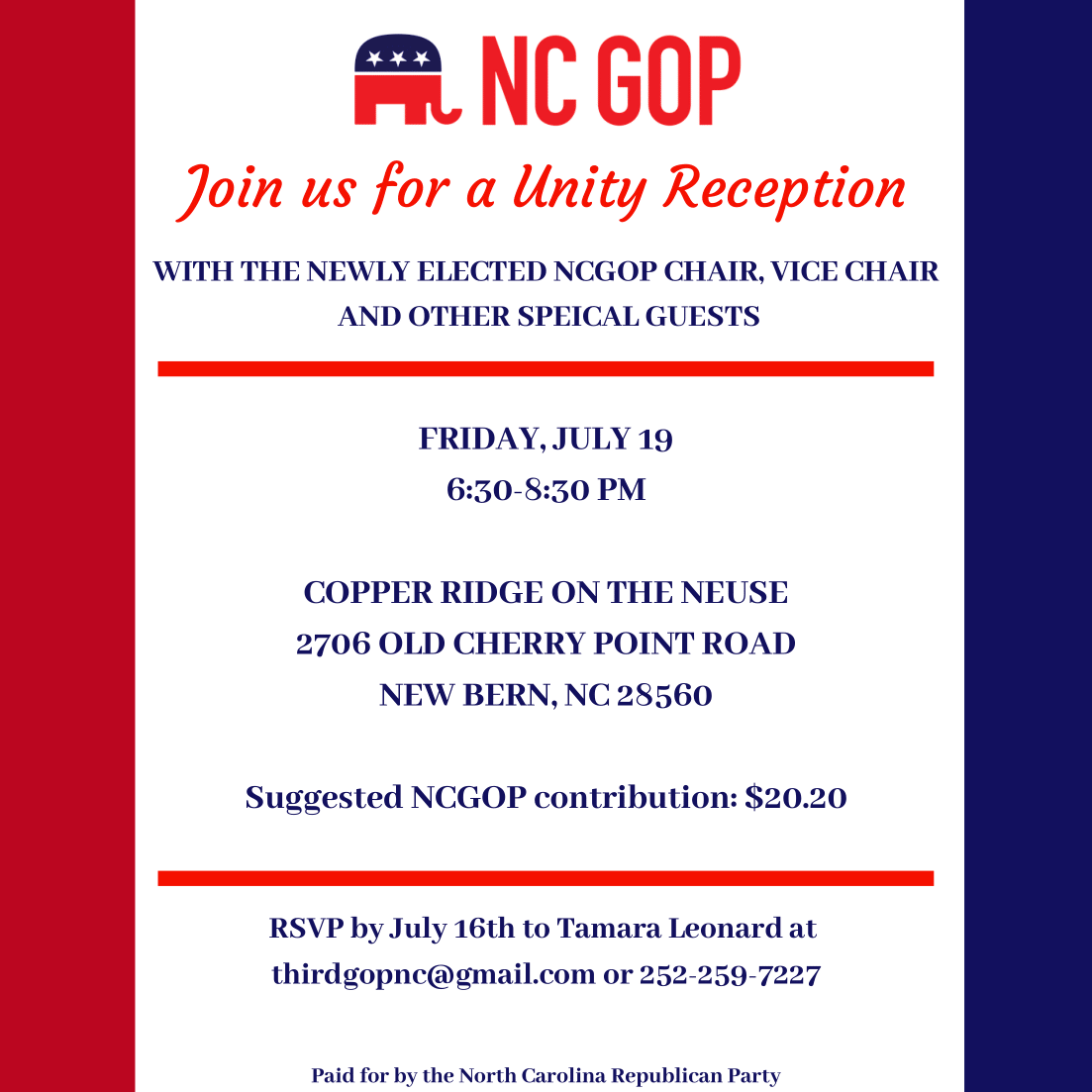 Want an update on the 2020 Convention in Charlotte? Good. There's an event for that in Charlotte on July 23rd being hosted by the Mecklenburg County Young Republicans: CLT In 2020 RNC Convention Update

The Union County GOP will be holding a picnic to benefit the judges running for SCONC and the Court of Appeals in 2020 on August 24th. Want to attend? Check it out: Union County GOP Judges Picnic

Have a good weekend!

Join our email list to keep up to date with the Orange County, NC GOP!

Chip in to support our grassroots efforts in Orange County, NC!