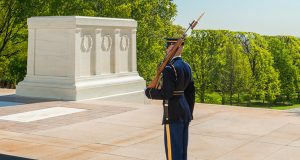 Are you ready? Memorial Day is the traditional beginning of summer. Are you ready for the annual task of hanging your American flag to fly on Memorial Day and the rest of summer?  As we remember those who gave the ultimate sacrifice in defense of the country they died for, let's consider a few numbers.

624 – The number of acres encompassed by Arlington National Cemetery, one of 155 National Cemeteries maintained by the Veterans Administration, not including the Memorials like Pearl Harbor.

21 – The steps taken from one side to the other, as they stand guard, by a member of the 3rd Infantry, the Sentinels of The Old Guard detail that walk every day watching the Tomb of the Unknown Soldier in Arlington National Cemetery through rain, snow, heat, and hurricanes, in honor of those who never came home to their families. As we celebrate 2021, we connect what 21 means at the Tomb of the Unknown Soldier. Twenty-one symbolizes the highest military honor: the 21-gun salute. During the changing of the guard, a Tomb Sentinel marches 21 steps down a black mat, turns east for 21 seconds, then north for 21 seconds and repeats.

172.5 – The acres of land in France that were given to the United States after World War II in recognition of those Americans who died on the beaches of Normandy and subsequent fighting to liberate Europe. It's called Normandy American Cemetery and Memorial, so that our dead rest on American soil, across the ocean.

307 – Members of the US Military, mostly Marines, who were killed in the 1983 Beirut Barracks bombings.

6,800 – The number of soldiers who died in the original fight for freedom and our independence, against King George III and England, from 1775 to 1783 in 165 engagements.

1,584 – Members reported unaccounted for or missing in action by the US Department of Defense for actions resulting from service in Southeast Asia from 1967 to 1975 with the fall of Saigon. The POW/MIA flag honors the roughly 82,000 service members listed as prisoners of war, missing in action or unaccounted for in America’s past wars. It was first flown above the White House in 1982, according to the Department of Veterans Affairs.

+2,000,000 - Purple Hearts awarded or would have been awarded since WWI, for all members of the Armed Forces of the United States, wounded or killed in service of our country. The Purple Heart is awarded in the name of the President of the United States to those members or their families. The Purple Heart was revived on the 200th Anniversary of George Washington's birth, out of respect to his memory and military achievements, by War Department General Order No. 3, dated February 22, 1932.

Americans gave, and continue to shed, their blood for your and your family's freedoms. Please take time this Memorial Day to remember that sacrifice.

In the Cause of the Right,
Rev. John B. Gaither
Chairman, Orange County Republican Party